According to the author, naval ship handling still relies heavily on craft expertise. His article writes down some formulas and procedures to reduce collision risk. 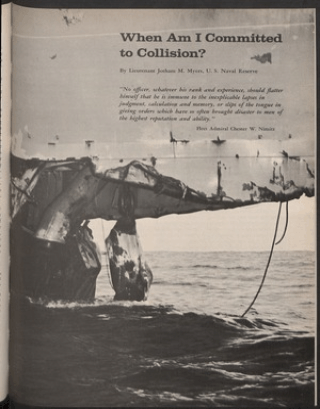 Source: When Am I Committed to Collision? | U.S. Naval Institute  My own reaction is in a brief comment at the end of the article.

Here is another article in the same issue of US Naval Institute Proceedings that does a great job of explaining how collisions can happen, and why the captain of a USN ship is always responsible, and never completely safe.

This is the burden of command. A captain puts the lives of several hundred sailors into the hands of a young officer, typically 25 years old and typically green. So what does a captain count on to prevent disaster? The captain has “standing orders.” These are the rules in his or her ship that everyone (especially the OOD) lives by. …”

The odds of dying in a car wreck are twice as high as this thing “exploding.” I’m keeping it.

Source: My Galaxy Note7 is still safer than my car. I’m keeping it

This author does an interesting calculation, but he does it wrong. The 100 Note7s that have exploded, out of 2.5M sold, were all used for 2 months or less since the phone has only been on the market that long. When you correct for this, the rate of fires over a 2 year ownership period is roughly 1 in 1000. (Probably higher, for several reasons.)

Second, lithium battery fires are nasty, smelly, and dangerous because they can set other things on fire. I speak from personal experience. Do you want to leave a device plugged in at night that may have a .1% chance of burning your house down over the period that you own it? I hope not.

His car wreck odds calculation (1 in 12000), by the way, may be per-year, but again he does not realize that it matters. But he is right that cars are plenty dangerous. I once estimate that at birth an American has a 50% chance of being hospitalized due to a car accident during their lifetime.

There are many other TOM issues to do with this Samsung Note7 recall. Clearly they have internal problems, and problems somewhere in management.

Yesterday I gave a Grand Rounds presentation at Stanford Med School. My title was

Craft, Standardization and Automation: Powerful yet Perilous Paradigms for Control when Lives are at Stake

Most of my talk was about the adoption of procedures (checklists) by US military aviation, during and after WW II. It has close analogies to the situation of health-care today.  Here is my short presentation.  A much longer presentation, with more examples but without discussion of medicine, is here.

Initially, I was concerned that my topic might seem too esoteric for Stanford’s medical faculty. However, their Medical Grand Rounds program covers a lot of ground. My topic was only 1.5 standard deviations away from the mean.

For more of my research on flying paradigms and how technologies evolve from crafts to sciences, please see this page.

I have just uploaded Chapter 1 of my book manuscript. It summarizes four revolutionary changes in how people flew. It outlines some themes of the full book, including People and Work and Is Science Inevitable?. And of course it includes a few gripping tales of accidents averted – or not.

Commercial aviation today is very safe and scientific. But it wasn’t always. Please send comments, anything from typos to critiques.

Over August I will put up some photographs and key tables from the full book.

Why do we follow digital maps into dodgy places? Something is happening to us. Anyone who has driven a car through an unfamiliar place can attest to how easy it is to let GPS do all the work. We have come to depend on GPS, a technology that, in theory, makes it impossible to get lost. Not only are we still getting lost, we may actually be losing a part of ourselves. Source: Death by GPS | Ars Technica

As usual, aviation is way “ahead.” Use of automated navigation reduces pilots’ navigation skills; automated flight reduces hand-flying skills. Commercial aviation is starting to grapple with this, but there is no easy solution.

Proving self-driving cars are safe could take up to hundreds of years under the current testing regime, a new Rand Corporation study claims. Source: Self-driving cars may not be proven safe for decades: report  The statistical analysis in this paper looks fine, but the problem is even worse for aircraft (since they are far safer per mile than autos.) Yet new aircraft are sold after approx 3 years of testing, and less than 1 million miles flown. How?

How does the airline industry get around the analogous statistics? By understanding how aircraft fail, and designing/testing for those specific issues, with carefully calculated specification limits. They don’t just fly around, waiting for the autopilot to fail!

END_OF_DOCUMENT_TOKEN_TO_BE_REPLACED

Shattering bats are dangerous for both the players and the fans. Why do bats shatter? Why did the incidence jump?

Source: The Reason Baseball Bats Break Is More Complicated Than You Think Gizmodo, which  pulled the story from YouTube’s Practical Engineer.

Comment: In terms of technological knowledge, the shift from ash to maple wood for bats made some of the manufacturing and hitting knowledge obsolete. It took an MLB study to identify the problem. The solution was to adjust a seemingly minor design decision — the direction they place their logo. The intermediate causal variables were the different grain structures of the two woods.

Recently, bat-makers have started rotating their logos by 90 degrees on maple bats, as well as marking the grain on the handles. Bat breaks have gone down about 50 percent as a result