When the doctor’s away, the patient is more likely to survive | Ars Technica.

Very surprising. When cardiologists are away from the hospital, deaths after heart failure or cardiac arrest declined. I’ll probably use this in my course this Spring. (Or perhaps in both courses: Big Data, and Operations Quality in Healthcare.) 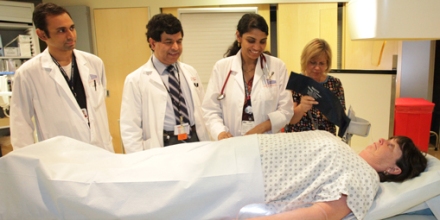 I am intrigued by the way they did a natural experiment: look at days when a national cardiology conference was going on. I’ll have to read the article to see how powerful it is.

From the Ars article. If the third hypothesis is true, it would take an RCT (randomized controlled trial) to prove it. This historical analysis is a lot easier!

In a press release accompanying the report, one of its authors, Anupam Jena, said “That’s a tremendous reduction in mortality, better than most of the medical interventions that exist to treat these conditions.” What could possibly be causing it? The authors consider three possibilities. First, there’s something involved with the changes in cardiology staffing that occur when specialists go out of town that actually increases care. The second is that there are fewer people having outpatient or same-day procedures, given that doctors wouldn’t schedule these when they knew they’d be absent. This would allow the remaining physicians to better focus care on the serious cases.

The final possibility that they consider is that the doctors that remain behind are more cautious about the care they give, avoiding aggressive procedures such as the use of angioplasty or stents to re-open clogged heart vessels. This would be consistent with the lack of effect in acute myocardial infarction patients, where this procedure is used less often.