TL;DR In Southern California should put PV on houses and buildings that are far from the coast, because coastal areas are cloudy much of the summer. But the actual pattern is the opposite. I estimate a 30% magnitude of loss. Even my employer, UCSD, has engaged in this foolishness in order to appear trendy.

The bumpiness of this graph shows the effects of coastal weather in August.

I live in a moderately well-to-do neighborhood of San Diego about 5 miles from the Pacific.  Perhaps 10% of my neighbors have PV (photovoltaic arrays) on their roofs, but the closer you go to the coast the more expensive the houses and the more have PV. This is rationally backward, as I was reminded by looking at the web site for the Mission Bay Aquatic Center (MBAC).

MBAC has a 41 PV  kW array (roughly equal to 8 houses), but it is very near the coast. The problem is that Southern California gets coastal marine layers quite often, meaning low clouds that last all morning or longer. The nearer the ocean, the more frequent and longer lasting these clouds are. In other words, less sunlight. 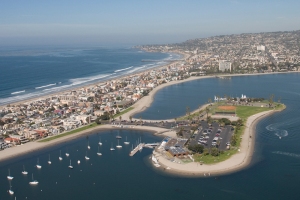 So if we took the MBAC solar array and moved it to another building 20 miles inland, the cost would be the same while the output would go up. From the graph of daily output in August, an inland site would have generated about 41% more energy! ** The effective cost per kWh would have been 30 percent lower!

Not to pick too much on MBAC: someone gave them the money, so they used it. But it would have been better for them and for utility customers if they had put a giant sign on their roof saying “Here’s is a photo of our PV array. It is on the XYZ building, 40 miles inland,” and then written a “split the difference” contract with the building’s owner.

There is also an income distribution effect of this pattern, from lower income to higher income homeowners. Wealthier people, who live near the coast, are getting a bigger subsidy through PV tax credits than the raw numbers suggest. To put that another way, we generally calculate the subsidy per kW of capacity, when what matters is subsidy per kW-hour of energy. Of course, there are many other income distribution effects of PV subsidies, in all sorts of directions.

** I got the 41% estimate by comparing the best day of the summer, when there was presumably zero coastal layer and 294 kWh were generated, with the average in August so far of 207 kWh. This is clearly a guestimate, but there are now so many sites in S. California that it should be possible to do a spatial map at a fine level of granularity.