I recently visited some friends and colleagues at Wharton to discuss my work on evolution of flying. Naturally, Malaysia Air  MH370 came up. We have continued the discussion by email since I got back. Here is a note I wrote, explaining why it’s impossible to preprogram a flight plan so that the pilots could not override it, if they were conscious. 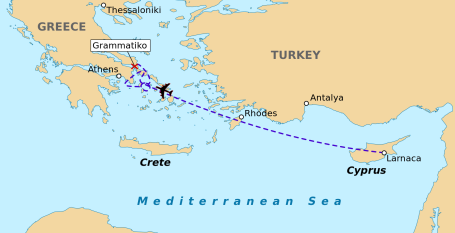 Notice the automatic circling when it reached Athens. Everyone onboard was dead.

Sid, overriding manual override  is designed to be impossible. The pilots always have override. Indeed, the first 2 items on some emergency procedures are:

and there are specific buttons to make that easy to do in a hurry. (As well as by going into the Flight computer and reprogramming it, or rebooting it, etc. )

So for remote human access, against the will of the crew, one would either have to:

1) Kill the pilots, e.g. with a bomb or a poison in their food. (In at least some airlines, pilots eat different food.)

2) or, do a major, super, extreme hack of the control system, overriding something that is intentionally made impossible.

Note that pre-loading a flight plan, before the pilots get on board, is done from time to time, although AFAIK most pilots prefer to do it themselves. Look up Air New Zealand flight 901, which crashed into Mt. Erebus in 1979 as a result of miscommunication about the flight path.

I don’t see that human agency is necessarily involved. If a terrorist were trying to destroy an aircraft, they would probably not want it to fly for 7 hours before crashing; too much chance of something intervening. Nor would they necessarily want it to crash in the water; why not program it to crash in some symbolically important city if you really have that much control?  To me, inhuman agency is at least as likely. Someone on board the aircraft is the third possibility.

There are cases of both pilots being killed, and the aircraft flying on indefinitely. See Helios Airways  Flight 522.  The  problem there was that the pilots failed to turn on cabin pressurization. The aircraft ascended to its programmed flight level, by which time the pilots were unconscious. A Greek fighter plane, sent up to contact the AC, saw one of the cabin crew, wearing a portable  oxygen mask, attempting to fly the aircraft himself. He was unable to gain control, and the AC crashed when it ran out of fuel.

“The Helios flight, where the pilots passed out in the cockpit, was part of our annual training. Before that happened we had post-9/11 steel doors which could only be unlocked from the inside either by switch or manually. After Helios, keypads with normal entry codes and emergency entry codes which give us five seconds to enter were brought in.”

So, I’m still betting on a fire, which gradually overcame the pilots despite various efforts on their part. If true, we will probably never find the aircraft and never know.