Hello! Blake Ellison here, and I’m Roger’s newest grad student assistant. I’m interested in video games (both academically and personally), so I’m helping the team try to make sense of our findings that video games make up a huge proportion of our data consumption (when bytes are used as the measure).

A simple reason why video games comprise so much of our information  is the sheer volume of pixels that get transmitted to your eyeballs. A game running at 60 frames per second at 1080i on a current-generation console like the Xbox 360 is pumping out a huge amount of data. That’s to say nothing of hardcore PC gamers, who have what amount to miniature supercomputers sitting on their desktops. 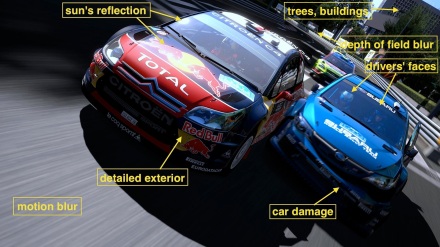 These ‘supercomputers’ don’t have all that power simply to push out 1920 x 1080 pixels 60 times per second. They have the power to do all that and make it look good.

To demonstrate what gamers demand from their little silicon wonders, we included a screenshot from a good-looking modern video game, NBA Live 10, in the initial digital release of the report. But for the print version, coming soon to a university near you, we decided to give this some more attention.

Roger and I rounded up some particularly attractive video game screenshots, and I’ve pointed out some noteworthy details in each image. Included are NBA 2K10 (which is even more gorgeous than NBA Live!), NHL 2K10, and Gran Turismo 5. Ultimately, we could only use one in the report, but since we went to the trouble to prepare so many candidates, I thought we’d share them with our audience.

2K Sports’ NBA 2K10. This screenshot was included in the print version of our report.

EA Sports’ NBA Live 10. A version of this screenshot was included in our original digital release.

The NBA games look even better in motion. Remember, these downloads are heavily compressed, far below what you get if you play them live.

In the near future, I’ll be trying to update our estimates of the compression of video games, which poses a unique challenge since games are played in a variety of screen resolutions and may even depend on the kind of game being played!

We’re very open to ideas on how to calculate our estimates. In the meantime, I’ll be capturing lots of game footage and seeing what it reveals.