A contributor to Dave Farber’s IP (“Important People” list) recently stated that 1 Megabit per second  (Mbps) is adequate bandwidth for consumers. This compares to “high speed Internet” which in the US is 20 Mbps or higher, and Korea where speeds over 50 Mbps are common.

My response: 1 Mbps is woefully low for any estimate of “useful bandwidth” to an individual, much less to a home. It’s risky to give regulators an any excuse to further ignore consumer desires for faster connections.  1 Mbps is too low by at least one order of magnitude, quite likely by three orders of magnitude, and conceivably by even more. I have written this note in an effort to squash the 1Mbps idea in case it gets “out into the world.”

The  claim that 1 Megabit per second is adequate:

> The fact is that, according to neurophysiologists, the entire bandwidth of
> all of the human senses combined is about 1 Mbps. (Some place it slightly
> higher, at 1.25 Mbps.) Thus, to completely saturate all inputs to the human
> nervous system, one does not even need a T1 line – much less tens of megabits.
> And therefore, a typical household needs nowhere near 25 Mbps – even if they
> were all simultaneously immersed in high quality virtual reality. Even the

First, I don’t know where the 1Mbps number comes from, but a common number is the bandwidth of the optic nerve, which is generally assessed at around 10Mbps. See references. 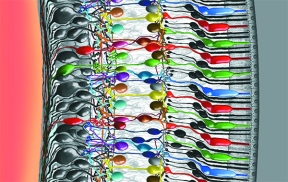 An American Scientist article on “How the Retina Works” is available here.

Second, a considerable amount of pre-processing occurs in the retina and the layer under the retina, before reaching the optic nerve. These serve as the first layers of a neural network, and handle issues like edge detection.

Third, our eyes move around on multiple time scales and for many reasons, including various involuntary feedback loops. We selectively sample/perceive a fraction of what we are exposed to. Having the “extra” information accessible is very important to our overall sensing of the world, such as our situational awareness.

In addition, the world implied by Brett’s statement that we only need 1 Mbps is one where people consume exactly 100% of the information they receive electronically. As we all know, we have selective attention. We record data (e.g. pdfs, TV) that we never actually look at. We dip in and out of information streams. We queue up information to look at later. All of these have value to consumers, hence we are willing to pay for higher bandwidths than 1Mbps or even 10Mbps. See Bob Shulman’s thought experiment about a 1 Mbps video link, at the bottom.

Of course, the bandwidth also affects the time needed to download large files. I can sometimes DL a multi-gigabyte game on Steam while eating dinner. Again, this has some value that I am willing to pay for. Of that file, much of it is material that I will probably never see or take advantage of – but I need to load the entire game before it will start.

Caveat: I’m no expert on the human sensory system. But I looked into it briefly years ago for research on “How Much Information” people receive. http://ijoc.org/index.php/ijoc/article/viewFile/1566/743 We estimated an average around 20 zettabytes per day, which works out to 1 exabit per second (10^18 bps) of time awake. Much of that is generated by graphical software. What matters to consumers in any case is not _average_ bandwidth over a day, but the useful maximum bandwidth.

https://www.researchgate.net/publication/237527513_Report_How_Much_the_Eye_Tells_the_Brain.
>Human retinal circuitry and physiology
>Christina Joselevitch Yale University, United States
>Abstract
>Every second, in an average daytime light environment, hundreds of millions of photons enter the human eye and arrive at the photoreceptor layer of the retina. All our information about the visible world is contained in this rain of photons. The retina is a complex tissue, literally an extension of the brain, which transforms the rain of photons into bioelectric signals containing all the information available to the brain to interpret and respond to the external visual world. A considerable amount of processing takes place within the retinal tissue itself. Understanding what kind of processing takes place at each retinal stage is crucial for understanding normal vision, vision in the presence of diseases affecting the retina, and, ultimately, for the development of therapies to treat such diseases. This manuscript reviews the relation between structure and function of the different retinal pathways and addresses their possible roles for visual perception. Keywords: retina, physiology, parallel pathways, vision, perception.

The original post excerpted from Brett Glass appeared on Dave Farber’s IP list. I have general permission to quote from the list, which is archived at https://www.listbox.com/member/archive/247/=now

Bob Schulman <bob@rexdog.net> also made the following point:
…Here’s a thought experiment to run while keeping in mind 1Mbps: think of a VR experience where bandwidth to the VR headset is throttled to 1Mbps. Do I need to say more about the inappropriateness about mapping what neurophysiologists say to what users experience from their computers?