Something I just found for my Big Data class.

An interesting thread of player comments has a good discussion of potential problems with automated bans. Only time will tell how well the company develops the system to get around these issues.

This company also took an experimental approach to banning players. And hired 3 PhDs in Cognitive Science to develop it. (Just to be clear, their experiments did not appear to be automated A/B style experiments.) After the jump is a screen shot from that system. 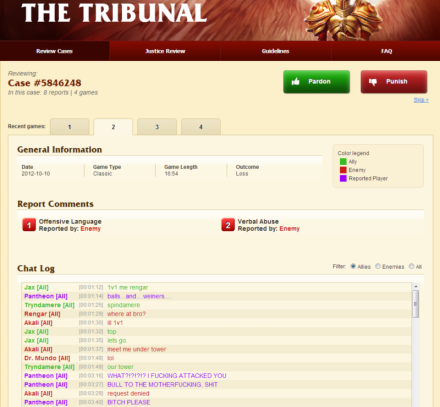 But, I’m not tempted to play League of Legends to study player behavior and experiment with getting banned! (I don’t think I’ve ever tried an MMO beyond some prototypes 15 years ago.)  If any players want to post your observations here, great.